Early November saw over fifty scientists coming together in Belfast to discuss the use of experimental measurements and methods to test and validate models relevant to ion beam and nanoparticle based forms of radiotherapy as part of Working Group 5: Radiobiological scale effects (DNA DSBs detection, prediction and cellular consequences). Fittingly for such a cross-disciplinary topic, the meeting was hosted jointly by Queen’s University’s School of Maths and Physics and its Centre for Cancer Research and Cell Biology.
In association with this meeting as part of the re-launch of Cancer Nanotechnology as a gold standard open access journal, there will be a special collection of articles published by Springer aiming to capture the themes discussed by several of the invited speakers. COST action members with ideas for other special collections or regular paper submissions for this journal are encouraged to contact Fred Currell f.j.currell@qub.ac.uk in connection with his role as Editor-in-chief of this journal.

will take place at the Faculty of Electronic Engineering, University of Nis, Nis, Serbia, in the period from 27th – 30th May, 2014.

The website for RAD 2014 Conference has already been created on the link http://www.rad2014.elfak.rs, and all the necessary information will be uploaded there.

The 2nd NANO-IBCT Conference 2013 organized within the  COST framework will be held during 20-24 May, 2013 in Training and Rehabilitation Center of Gdansk University of Technology in Sopot, Poland.

or in the First Announcement

The workshop will take place at the Institute for Ion Physics and Applied Physics at the University of Innsbruck, Austria.

A general information about the meeting, travel and accommodation can be found at the homepage: www.uibk.ac.at/ionen-angewandte-physik/tagungen/nano-ibct-2013/

Madrid, Spain, November 7-9, 2012.
First information about the workshop is now available on the web:

Groningen, The Netherlands31 May-1 June 2012
Location: Kernfysisch Versneller Instituut, Grote Conferentiezaal
The PDF file of the announcement is available via this link
More information could be found on www.rug.nl/kvi/research/atomicphysics/cost_ -workshop/index

Workshop on Nano-IBCT data base development

The Nano-IBCT database workshop will be devoted to the discussion of a new database to be created within the COST Action Nano-IBCT.

The aim of this workshop is to establish contacts between the teams willing to participate in the development of the Nano-IBCT data base, to link this development to the existing project Virtual Atomic and Molecular Data Center ( VAMDC, http://www.vamdc.eu ), and to establish standards for the newly created Nano-IBCT Data Base.

The European COST Action "The Chemical Cosmos" organises a conference with the subject "Ion chemistry in space" in Prague from 17-19 May 2011. 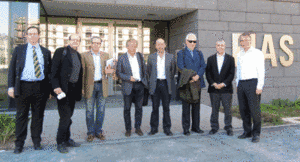 The first  Scientific and Technical Programme Committee (STPC) meeting of the COST Action Nano-IBCT was held on April 8, 2011. The meeting took place at the Frankfurt Institute for Advanced Studies, Ruth-Moufang Str. 1, Frankfurt am Main, Germany. At the Nano-IBCT STPC meeting were considered and approved the STSMs for the period April-October 2011.